What is System Software? – Functions, Examples, and more

All computers, regardless of their use, operating system or company that manufactures them, use system software housed in their ROM memory. In this way, it is guarantee that it is always possible to access it, regardless of whether parts of the computer’s hardware are replace that contain information necessary to start the computer’s OS. 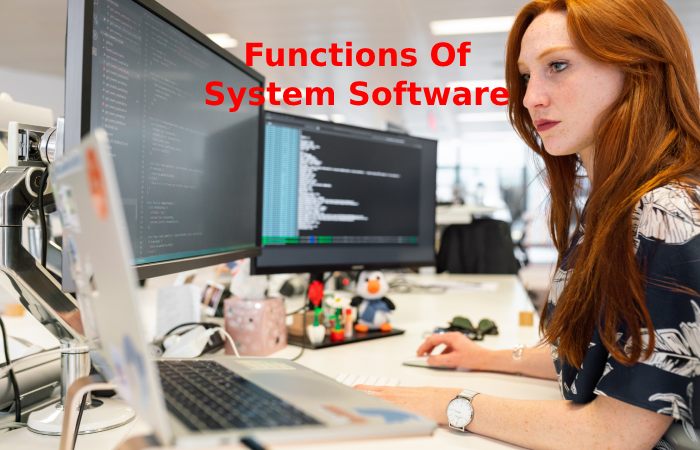 There are many functions that operating software fulfils in terms of the operation of a computer. Among the most important, its participation in managing the computer’s RAM stands out. In the same way, an important function of the basic software is found in the possibility of interacting with the input devices and different peripherals connected to the computer.

The access, use and recognition of the hard disk and other hardware components that are necessary for the operation of the computer is also part of the functions that can be handled from the system software.

To make all of this possible, the system software is subdivide into several elements that are described below.

The operating system is often use as a synonym for system software because many operating systems allow the user to interact with the elements that make up the base software. In addition to functioning as the means of interaction between the user and the computer through an interactive interface, the OS makes it possible to modify and manage parameters to use the equipment’s hardware. One of the most common operating systems that work as system software and OS at the same time is Microsoft Windows.

Its name comes from the Anglo-Saxon acronym Basic Input Output System, translated as Basic Input and Output System. As its name indicates, this part of the System Software is responsible for a computer starting up and recognizing the system information it needs to operate normally. At the same time. It makes it possible for the computer to recognize and interact with any external media connected to it.

Generally known as Basic Utility Programs (PUB), they are a series of instructions house in the basic software of the computer. These are responsible for maintaining continuous control of the different hardware elements. And reporting promptly in the event of any abnormality or failure. In this sense, it reflects parameters such as temperature, energy consumption or use of storage space.

Command lines are a series of instructions program by default in the computer system of a computer. These instructions contain everything necessary for the CPU to carry out all the essential functions that are need for the correct operation of the equipment at all times.

There are numerous examples of systems software use in most computer equipment that we use every day. Below we mention some of the most popular.

It is the most used operating system on the planet. This system software is generally use on computers, making it possible to manipulate the content. And functionality of the laptop interactively and easily. Microsoft Windows began to grow from the 90s, and since then, it has become one of the favourites worldwide.

Among its main advantages is its easy compatibility with many devices and its attractive and intuitive user interface. However, unlike free license software, Microsoft Windows has licensed software, so you need to pay to license it.

The Android operating system is the most used in mobile devices. In addition to being free, it allows users to interact comfortably with the computer on which it is install. Android has millions of application software available to users. Making it one of the most preferred system software for mobile users.

Linux is an operating system portion of the well-known “free software”. In addition to being free, it allows programmers to manipulate its code to adapt it to their particular needs. Despite this important advantage, Linux as free license software has compatibility problems with other equipment and systems. Which, in addition to reducing its popularity, limits its functionality for global consumption.

iOS is an operating system advanced for Apple mobile devices; it has extensive support and coverage by Apple support for mobile devices manufactured by the said company.

Also Read: How Do Chatbots Work? – Functions, And More

What is Application Software? – its Features, types, and Examples

Customer Service: What it is and How to Improve it in 2022

What is a Mobile Application? – Operating Systems, and more